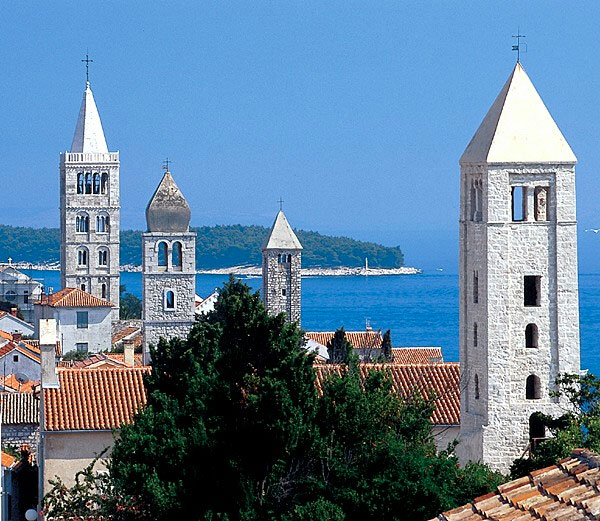 History
The first written accounts of the Island of Rab can be found in the works of the antic writers. However, it is quite certain that people lived here much earlier. The remains of the late Paleolithic tools in the area of Lopar are the proof that the Paleolithic man lived here.

This Paleolithic man was superseded by the more advanced Neolithic man, but at the end of the Neolithic period the Libums arrive to this parts, so it is realistic to presume that the present port and the city of Rab were started at that time. The oldest information on Rab can be found in the writings of the several Greek and Roman geographers. In those writings Rab is mentioned as Arba, Arva, Arbia, Arbitana. The origin of that name can not be established with certainty, but it is supposed that translated from the Indo-European root of ARB it means umber, dark, forested which is also characteristic for the island today. That name was adapted by the current inhabitants, the Slavic Croats, to their own language and was transformed into Rab. It is very likely that the name of Rab dates all the back to the 7th century a.d., just after the arrival of the first Slavs to the island, however the oldest known document with the Croatian name Rab is a Latin decree about the foundation of the St. Euphemia abbey, that is kept in it’s museum, and it dates to the 15th century.

Tourism
The Island of Rab is constituted from several settlements (Kampor, Palit, Banjol, Barbat, Mundanije, Lopar and Rab). The old city of Rab dominates the island with it’s four church towers and medieval streets, so it is no wonder that Europeans named it "Little Venice", with its preserved cultural and historic centre with numerous monuments.
Tourists started coming to Rab more then two centuries ago. Organized tourism was started 130 years ago. Rab reached it’s golden years in the 80s. In the year 2004 Rab won the title of the best tourist destination in Croatia, and in 2005 it was pronounced a vice champion of poluotok rabtourism. In the same year Rab won the silver flower of Europe award, as one of the best arranged and most desirable European destinations...
Because of it’s care for maintaining impeccable surroundings and investing in it’s beaches Rab is on the tourist cards rated as a destination with a clean and high quality sea (Blue flags on the beaches Lopar - Crnika and Suha Punta).